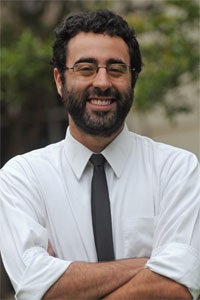 In the Fall 2017 semester, I’ll be starting in my new job as Assistant Professor of Political Science at Wayne State University.  For the last two years, I’ve been a Visiting Assistant Professor at Michigan State, and before that I received my PhD in 2015 from the University of Texas at Austin. My dissertation was a study of the theme of political ambition in Plato’s portrayal of Alcibiades and his relationship to Socrates.  Since then, I have turned the dissertation into a book, which will be published by the University of Pennsylvania Press in May of 2017.

I have a number of other projects in the works.  An article about Alcibiades’ Socratic education, related to my dissertation but with a different emphasis, is currently under review at a political science journal, as is an article on Socratic leadership in Xenophon’s Hellenica (presented at the 2015 meeting of the Northeast Political Science Association in Philadelphia, PA).  In recent months, I have prepared and presented new work on Plato’s Cleitophon and Republic, which examines the difficulties Socrates encounters in attempting to attract students to a path of unfettered questioning while protecting himself against the charge of impious or seditious challenges to convention (presented at the 2016 NPSA in Boston, MA).  My major current project is a new book on Plato’s Letters, which will include an introduction addressing the state of scholarly debate concerning authenticity, a new English translation, and an interpretive essay.  Following most ancient commentators and a handful of more recent ones, I take the entire Letters as a Platonic literary whole providing an account of Plato’s own political career and of the relationship between his literary presentation of philosophy and his more measured assessment.  I have presented my analysis of the opening letters at the 2016 meeting of the American Political Science Association in Philadelphia, PA.

I did my undergraduate studies at Kenyon College in Gambier, OH, where I double-majored in physics and political science.   I studied with wonderful professors in both departments, and although I was confident by the end that I wanted to pursue a career studying classical political philosophy, I still regret that I had to leave physics behind.  Hence, it was a surprise and great delight when I discovered that I could continue to exercise my math muscles in graduate school at the University of Texas.  Making methodology my second sub-field was among the best decisions I’ve ever made.  Aside from the research opportunities I’ve enjoyed, I had the opportunity to teach the UT Government department’s “Math Camp”–a refresher in calculus, linear algebra, and statistics for our incoming graduate students–every summer from 2010 to 2014.  I then brought the curriculum to Michigan State in the summer of 2015 with great success, and in August 2016 expanded the curriculum for the first time by adding a two-day math and econometrics refresher for more advanced graduate students in the department.  I am already in conversations to bring my Math Camp curriculum to Wayne State.  In another life, I could have been very happy as a math teacher; in this one, at least I get to teach Math Camp.

I’m originally from Montreal, Quebec, Canada, a city with which I fall more in love every time I go back to visit my parents, my two brothers, and my dearest friends.  I’m a diehard fan of the Montreal Canadiens, and play hockey myself–a pastime I rediscovered, if you can believe it, in Austin, TX.  I enjoy camping, comedy, chess, (and, as of recently, Chinese chess and Korean Chess), playing music, etymologies, and not having a cell phone.  On Sunday, May 7th, 2017, I will have the profound pleasure and honor of marrying my fiancée, Cassie Léger.

Please find Curriculum Vitae, project abstracts, and other resources on the pages of this website.  Some of the content is still to come, but email me to request any materials or information.